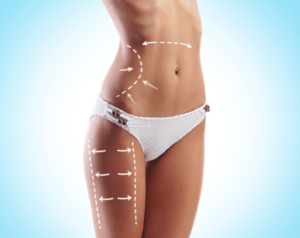 Liposuction (AKA “liposculpture,” suction assisted lipectomy) is the most commonly performed cosmetic surgical procedure in the US. Liposuction is a surgical technique, performed under general anesthesia or under IV sedation and local anesthesia and nerve block, that removes fat tissue from the subcutaneous compartments between the skin and the underlying muscles to reduce the volume of fat in a particular body area. Virtually, any area of the body where there is a disproportionate collection of fat tissue creating a contour irregularity, bulge or excessive fullness can usually be treated.

There are several types of liposuction techniques that combine the basic liposuction system with additional technologies to make the fat extraction process easier. These techniques include ultrasonic assisted liposuction (UAL), power assisted liposuction (PAL), and laser assisted liposuction (LAL). There is also a technique which applies ultrasound externally to the body area to be treated, then utilizes a traditional technique to extract the fat. The various technologies that can be used in liposuction tend to benefit the ease of fat removal by the surgeon. Each technique has its benefits and drawbacks and is usually a matter of technical preference of the surgeon. Practically speaking, it is not an issue of great concern to the patient and is a decision of the surgeon. Small incisions of a quarter to one-half inch are made in less conspicuous areas such as the belly button and natural skin creases and folds. These small incisions are closed at the end of the procedure with one or two simple stitches.

Depending on the number of body areas being treated and the size of the person, the liposuction procedure can take from as little as 30 minutes for small sites such as under the chin and neck to three or more hours for multiple site liposuction in a medium to large frame individual. The procedure involves first the injection of a saline solution that contains local anesthetic (lidocaine) and adrenaline (epinephrine) to shrink the small blood vessels in the fat tissue to limit bleeding. The fat is extracted through a skinny metal rod (cannula), which is attached to a vacuum/suction source. The cannula has openings near the tip, which draw the fat into the cannula and through the suction tubing and into a collection canister.

What Can I Expect Following Liposuction?

Immediately following the liposuction procedure, the body areas will swell (edema) and often bruise. The swelling reaches a peak in 24 to 36 hours, then plateaus for several days and then gradually begins to clear. In most cases approximately 75% to 80% of the swelling is cleared by three to four weeks. The remaining swelling may take three to four more months to gradually clear. When the swelling is greatest during the initial weeks after the surgery, the skin will be tighter. As the swelling subsides, the skin will become looser and deflate to some degree. Over time, the skin will tend to contract, shrink, and tighten. This process is part of the healing after liposuction and will continue for 6 or more months after surgery. In general, it requires at least three to four months to reach most of the final result and appearance after liposuction. There will, however, be an immediate noticeable change soon after the procedure. This is expected as explained to improve with time. Most people can gradually resume normal activities within one to three weeks depending on the amount of liposuction done, the age and health of the patient and the body type. Like most things in health and medicine, some patients will recover quicker than others.

The quality of the skin and the specific body area treated are two important factors in determining the final result. Thick elastic skin tends to rebound and contract well and responds better to liposuction, than thin, and/or very loose skin. Some body areas will tend to behave different than others as far as the resolution of swelling and degree of skin tightening following liposuction. For example, the lower abdomen and upper inner thighs in general tend to be slower to clear the swelling and the skin to tighten, than say the upper abdomen, outer thighs, hips, and buttocks areas. In general, any bruising will be cleared in about two weeks. Skin that has thinned, loosened, and has stretch mark damage will tend not to respond quite as well as thick or more elastic skin. The degree of rubber-band like quality of the skin overlying a liposuction area is important to the contouring or sculpting process during the healing phase after the procedure. This in turn impacts the final end result.

There is often a misconception amongst people as to what happens to a person’s body when fat is removed. The body has a fixed number of fat cells at birth. Except in some rare forms of morbid obesity, a person does not gain more fat cells as their body weight increases. What happens is that the amount of fat in each individual fat cell is increased, but no new cells are gained. After the area is liposuctioned, there are still fat cells (fat tissue) present, but they are fewer in number. Therefore, that specific site will have less fat gain than untreated areas if a patient gains weight after the procedure. It does not mean that fat will preferentially go more so to other areas instead. The other untreated areas will gain or lose fat volume (i.e., weight) to the same extent as it normally does; more and no less. On the other hand, the liposuctioned body area will have a permanently decreased ability to gain fat volume than before the surgery because there were fewer fat cells available to contain fat. The liposuctioned body part can gain weight, but not as much as it did before the surgery. It will be more resistant to weight gain.

How Much Pain Will I Be In Afterwards?

The pain associated with liposuction surgery is usually much less than most patients would expect. Although when observing liposuction surgery, most people say it “looks very painful,” after surgery most patients will generally describe the discomfort as feeling “very sore” similar to after a very hard weight resistance workout after laying off for a while. The small stitches are removed painlessly in 7 to 10 days after surgery. Patients wear a firmly fitting compression garment on the body part treated for three to four weeks. A compression garment tends to limit the swelling due to the accumulating body fluid (edema) in the area where the fat has been extracted. It compresses the skin over the area where the fat was removed and reduces discomfort. The garment is an important part of the recontouring of the treated body area after the fat is removed.

What Are The Risks Associated With Liposuction?

The possible risks and complications associated with liposuction in a healthy non-smoking individual who is within 25% or so of their ideal body weight are relatively low. The volume of fat removed during liposuction can range from as little as one to several 100 cc in small areas to three to four liters in a person having multiple sites done with a medium to large frame. Most plastic surgeons would consider four liters or more a large liposuction procedure. Although there are a few surgeons who may be willing to undertake high volume liposuction of 5 to 12 or more liters of fat in a markedly obese patient. This procedure should be performed in a hospital setting with at least one overnight stay for careful monitoring. In general, however, liposuction should be viewed as a procedure not for weight loss, but for body contouring to improve overall body proportion and overall appearance. Along with this almost invariably comes an improved self-image and self esteem.

In a patient with reasonable health and realistic expectations, liposuction is a very useful tool in the plastic surgeons armamentarium for long-term improvement in a patient’s body shape and form.

The goal of liposuction is to improve the contour and shape of various body parts and thereby improve the proportion and balance of the body as a whole. This procedure is not for the purpose of weight loss, although some weight is obviously reduced by the process. It is not a substitute for a sensible and healthy diet and exercise program. Ideally, if diet and exercise are not enough to correct contour excesses, then the liposuction procedure will further improve areas that are more resistant to reduction and improvement.